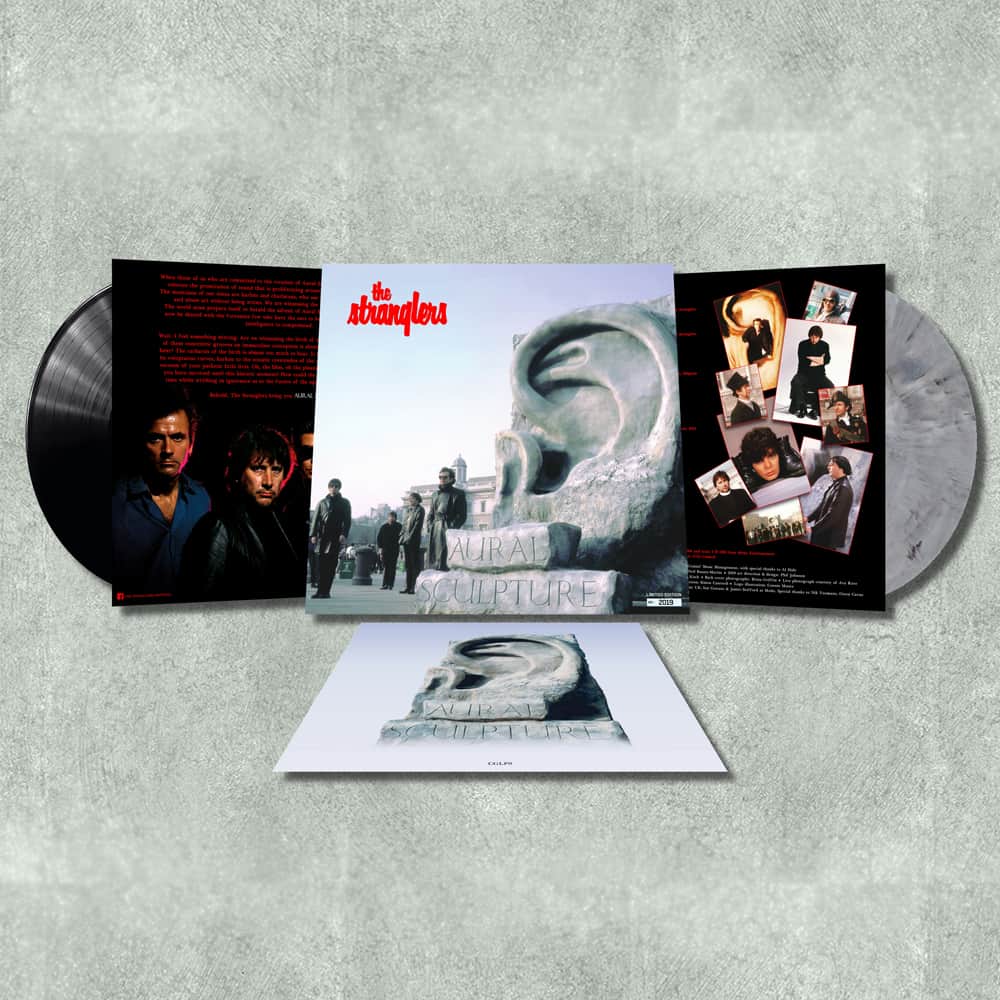 - ONE BLACK LP; ONE MARBLED STONE

Originally released in November 1984, AURAL SCULPTURE was The STRANGLERS’ eighth studio LP and second for the Epic label.

A new producer and engineer, Laurie Latham (who was coming off the back of the massive success of Paul Young’s No Parlez) injected another commercial direction. For the first time, a brass section was used to enrich the overall sound of tracks like ICE QUEEN, PUNCH & JUDY and MAD HATTER and the soulful larynxes of the trio who would later form London Beat added a “Stax” feel to LET ME DOWN EASY, NO MERCY and MAD HATTER. First single SKIN DEEP has a particularly rich production which remains powerful and contemporary. It was the first track Latham worked on. He took Dave to the studio in Brussels in early 1984 to develop the keyboard sound and the result was inspiring. On its release in October, six weeks ahead of the album, SKIN DEEP set a marker for what was to follow. One of the band’s finest songs, it still breaks up the radio play monopoly of staples NO MORE HEROES & GOLDEN BROWN to this day. NO MERCY and LET ME DOWN EASY made up the album’s trio of UK single releases into 1985, although SPAIN was additionally released in the country from which it takes its name. It deals with the nation’s development post-dictator General Franco and includes a passage from a speech - in Spanish - made by his daughter, Carmen, when she was eight. Other key songs include the haunting Cold War chill of NORTH WINDS - the only song on the album written and sung by JJ; the bouncy UPTOWN, with its classic Stranglers’ double-meaning lyric which, prima facie sounds like it’s about horse racing, complete with commentary excerpt but is, in fact, New York slang for someone high on cocaine; LAUGHING, an arguably surprising tribute to Marvin Gaye, who had been shot dead by his own father, himself a man of the cloth, on April 1st that year and SOULS, a first foray into Mayan culture that would re-surface and go deeper on next album, DREAMTIME.

AURAL SCULPTURE, with all its horns and backing singers, was regarded at the time as a further - controversial - shift in style for the band. It peaked in the UK Album Chart at a relatively disappointing #14, though the 10 weeks it spent there were around the busy festive period, so sales were healthy. Elsewhere, it proved to be a bit of a break-through album: in Germany, it was the band’s first to crack the Top 20 and it also performed well in Australia. The album title had been knocking around the band for a while. The track of that name had been a free single with FELINE at the start of 1983 and its adoption here was designed to not only wind people up in that Stranglers-do-dark-humour kind of way but was also a protest against all the real pretentious music around at the time. Again, it was another play on words; “oral” being connected with the mouth, whilst “aural”, the ears. Hence the giant 12’ tall Ear sculpture. This was created by Hugh’s brother-in-law, a then-north London art teacher, who got one of his classes to make it. It’s fibreglass, so they could cart it about. Hence the cover, which was shot in London’s Trafalgar Square in February, 1984, to the bemusement, if not indifference, of the tourists. The deeper photoshoot, as seen on the exclusive new inner bags, had the band dressed up: Hugh as Lord Nelson, down from his column; Dave as Biggles; JJ as Joseph Chamberlain and Jet as a country vicar. Fortunately, they stuck to the Meninblack look for the cover itself...

The bonus LP on this 35th Anniversary release is another first for this series of re-issues; it being cut on STONE GREY MARBLED VINYL. Sub-titled SHROUDED IN BLACK, this references a lyric from arguably the album’s finest track, NORTH WINDS. Side 3 kicks off with four tracks lifted from a particularly good night at Zurich Volkhaus in Switzerland. Recorded on the European leg of the AURAL SCULPTURE Tour on 14th April, 1985, these tracks have never been officially released until now. SPAIN was recorded live at the band’s co-headline slot at Reading Festival on 30th August, 1987 and made it onto the ALL LIVE & ALL OF THE NIGHT album, released in 1988. HERE & THERE & HOT CLUB (Instrumental) were, respectively, the B-side for SKIN DEEP and the 12” bonus track for NO MERCY. The former, produced by Laurie Latham, so possibly an early contender for the album, is JJ in full-on Euroman mode; the latter, named in tribute to the Hot Club de Paris, is possibly a left-over composition from Dave & JJ’s Fire & Water with some Django Reinhardt and Stéphane Grappelli-style acoustic guitars and jazz violin added for good measure (the pair founded the Hot Club de Paris) - along with a frantic drum machine.

Side 4 continues with three further B-sides. IN ONE DOOR (from NO MERCY), which possibly deals with all the various relationship issues in and around the band at the time; HEAD ON THE LINE (from the NO MERCY EP), which is an anti-drug song and ACHILLES HEEL (from LET ME DOWN EASY), which remains one of the best and liveliest tracks from this fruitful and fertile song-writing period. The last four tracks are all live. NORTH WINDS was recorded acoustically in November 2007 and was previously released on THEMENINBLACKINBRUGGE CD, whilst SKIN DEEP is from London’s Hammersmith Apollo in March 2010. It was previously released on the LIVE AT THE APOLLO DVD but this is the first time either track has been released on vinyl. ICE QUEEN (Brighton Dome) and UPTOWN (Bristol Academy) were both recorded in March, 2019 on the band’s UK tour and feature Jim on drums. They were added to the set specifically so they could appear on this 35th Anniversary 2LP. Again, both are previously unreleased and exclusive here.

The whole package is contained in a wide-spine sleeve. The Ear sculpture and band logo have been picked out in spot varnish to add a new gloss to the cover. Both LPs run at 331⁄3 RPM and are presented in newly-created inner bags. An art print of the Ear sculpture, measuring roughly 10”x10” with each one individually signed by Jet, JJ, Dave & Baz is also included.