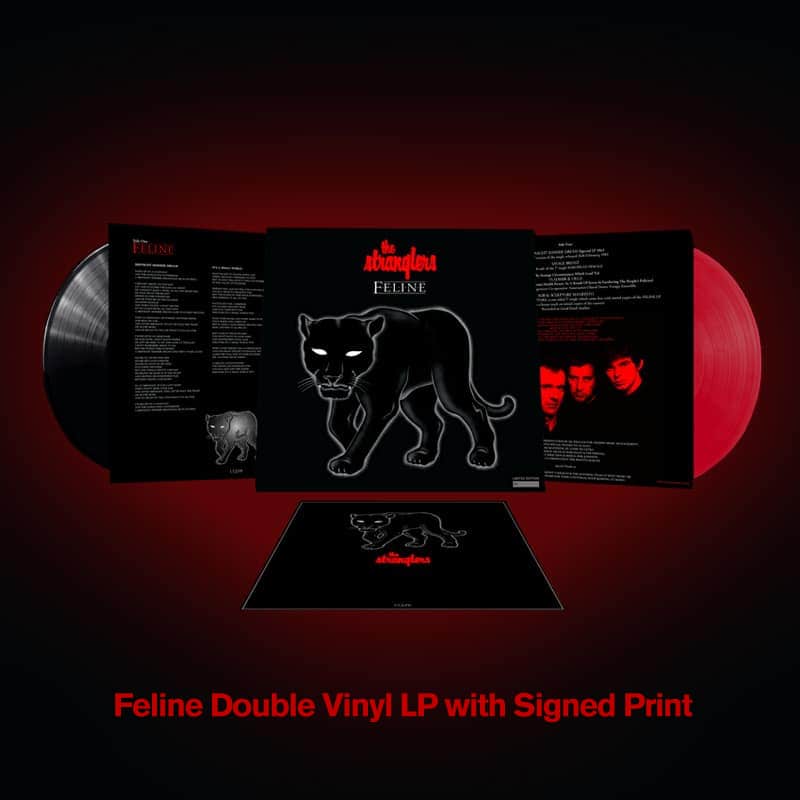 - ONE BLACK LP; ONE TRANSPARENT RED

Originally released in January 1983, FELINE was The STRANGLERS’ sixth studio LP and their first for new label, Epic.

1982 had proved to be a very good year for the band. The last three singles released for former label EMI had been more gentle and mellower-natured than anything their audience had been previously accustomed to. So when FELINE landed, it perhaps shouldn’t have been such a surprise to both fans and critics alike that there was such a perceived musical shift. Hugh & JJ’s acquisition of acoustic guitars from a now world-renowned guitar maker in Bristol helped shape FELINE into becoming possibly the nearest thing to an “unplugged” studio album the band have yet made. Gone were the powerful, sinister, throbbing melodies of their New Wave sound and in came an extraordinary and, at that time, hitherto-unheard mix of acoustic and electronic delights. Having said that, from the black panther on the sleeve to the underlying melodies of the record, underpinned by that unmistakable growling bass, the band still managed to convey their dark, menacing, moody and quietly threatening no-nonsense persona.

Much of FELINE was written at Jet’s house and as soon as the band were free from the shackles of EMI, Epic arranged for them to decamp to ICP Studios in Brussels for all of September, 1982 to record it. It was produced there by the band with Steve Churchyard and mixed by Tony Visconti.

The album was preceded by the gloriously-beautiful and breathy JJ-sung EUROPEAN FEMALE, which immediately fired the band back into the UK’s Top 10 Singles Chart. As the single peaked, the album crashed into the UK charts at number 4 and neither they nor the suits at Epic could have imagined a much better start to life at their new label. In fact it got better, as this new mellow sound struck a chord with European audiences - particularly in France - where FELINE effectively broke them to a much bigger audience; one they still enjoy to this day.

Two further singles were released from FELINE. The mighty album opener, MIDNIGHT SUMMER DREAM, a melody of JJ’s with intoned dead-pan lyrics from Hugh, following an grand symphonic opening from Dave, was released in late February 1983. Both the 7” Edit and the magnificent 101⁄2 minute Special 12” Mix feature amongst the tracks on the bonus LP that comes with this 2019 release. At the end of July, PARADISE was released. Again sung by JJ, he wrote it after an uncomfortable holiday he’d hated in the Seychelles because of his discomfort with the poverty that surrounded the luxury in which he was staying. Fact fans: it is the only STRANGLERS’ single that features voices from beyond the band, as backing vocals were provided by JJ’s then-girlfriend Anna von Stern and France L’Hermitte (of Polyphonic Size). The 7” Edit that appears on Side 3 is surprisingly scarce and has never previously appeared on vinyl. It has only otherwise been available on The Hit Men CD compilation from 1996.

The bonus LP on this 2019 release is cut on transparent red vinyl and entitled CLAWING AT THE SKY, which references both the black panther of the album sleeve and a lyric from ALL ROADS LEAD TO ROME.

Side 3 gathers the three 7” single edits and a couple of B-sides from the period. The EUROPEAN FEMALE Radio Edit was a surprising find, in as much as it turns out it’s never been previously released in any commercial shape or form until now. Other than providing the 7” radio promo serviced from late 1982, the tape has lain gathering dust in Sony’s vaults, overlooked by all previous compilers, until it was re-discovered in 2018. PÃWSHÄ’R & PERMISSION were, respectively, the B-side and the 12” bonus track for the PARADISE single. They are the two tracks within this collection that were recorded outside of the main sessions. The former, a mysterious single-repeated-word song, was recorded in New York in April, 1983; the latter, in London, two months later. Appropriately Summery, it chronicles the antics of the notorious French CRS riot police.

Side 4 includes SAVAGE BREAST. Originally intended as an album track, it was left off at the last minute only to surface before the album’s release as the B-side of EUROPEAN FEMALE. Hugh’s career-long love of playing with well-established names and phrases ran over on FELINE, with SAVAGE BREAST, MIDNIGHT SUMMER DREAM and LET’S TANGO IN PARIS completing his trio of word-play titles for 1983. In fact, so many of the song titles on FELINE are familiar phrases: IT’S A SMALL WORLD; SHIPS THAT PASS IN THE NIGHT; ALL ROADS LEAD TO ROME; NEVER SAY GOODBYE... Rounding off this collection are a couple of tongue-in-cheek curios that well support the band’s sense of fun. VLADIMIR & OLGA is akin to a modern-day Russian folk song based on a fictional couple in (then) Soviet-era USSR. It is the first in what became a quirky and much-loved series of adventures that were to recur over the next decade. The initial pressings of the original LP of FELINE included a free bonus one-sided 7” called AURAL SCULPTURE. It was a sarcastic rant against the death of music in general and song-writing in particular. If you got it, it was both barbed and hilarious. Subsequently, the theme was carried on, with that title becoming the band’s next album, so the track was from there-on re-titled AURAL SCULPTURE MANIFESTO. It also featured on initial copies of the cassette.

The whole package comes in a wide-spine sleeve. Paying homage to the original North American cover, the black panther here has had her fangs added. She has also been picked out in spot varnish to add a new gloss to her already-majestic coat. Both LPs run at 331⁄3 RPM and come in newly-created inner bags. An art print of the black panther, measuring roughly 10”x10” with each one individually signed by Jet, JJ, Dave & Baz is also included.

1. MIDNIGHT SUMMER DREAM
2. IT'S A SMALL WORLD
3. SHIPS THAT PASS IN THE NIGHT
4. THE EUROPEAN FEMALE (IN CELEBRATION OF)