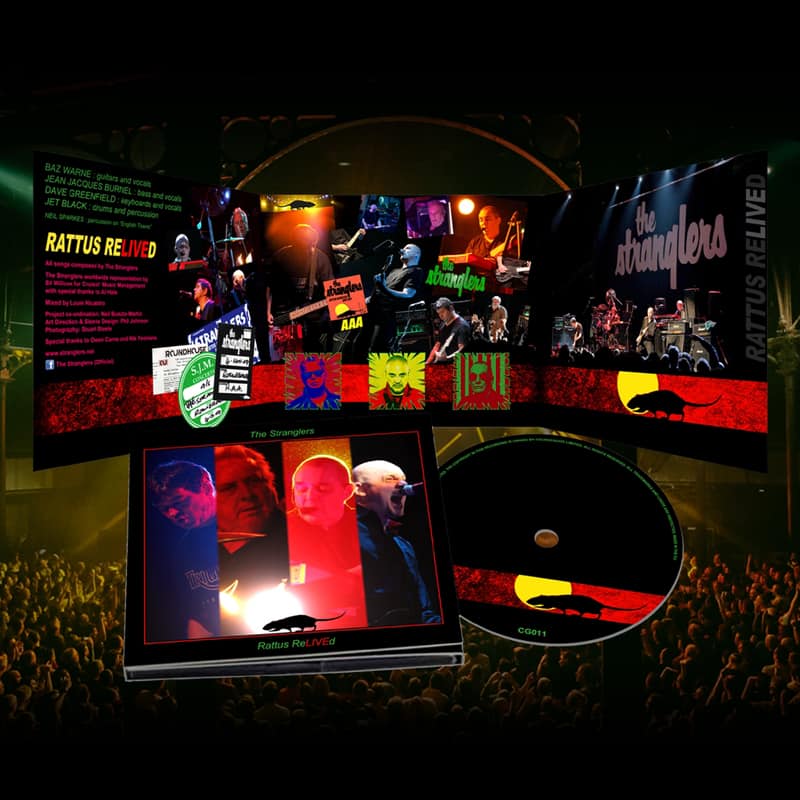 Rattus Relived is now available on a 20 track CD.

The recording features the landmark 2007 Roundhouse gig which took place on the 30th anniversary of the band’s record-breaking 1977 five night run at the venue.

The digipack CD also contains two bonus live tracks, Down In The Sewer and an acoustic version of English Towns and the sleeve artwork has been totally reworked from the vinyl release.

The STRANGLERS have a long history with the Camden venue, stretching back to a debut appearance fourth on the bill on a Leap Year February night in 1976. In mid-May, they supported Patti Smith on her two historic debut London shows. Then, on 4th July, they were chosen as the British representatives for the gig marking the Bicentennial of American independence, which saw them share the bill with The Ramones, who were making their UK debut. The aftershocks from this gig, to some extent, still resonate today. Two days into 1977 and The STRANGLERS made their last appearance at the Roundhouse as a support. With all their hard work suddenly showing signs of paying off, the RATTUS NORVEGICUS tour saw them headline for the first time that April. They were back in June, where demand for tickets was so high, they played the evening show preceded by a matinee and so sold out the Roundhouse twice in one day! In September, The STRANGLERS’ second album, NO MORE HEROES was released and the band embarked on a huge 40 date UK tour. This culminated in an unprecedented run of FIVE sold out nights at the Roundhouse at the start of November which, in the process, smashed the venue’s attendance records previously set by both The Who and the Rolling Stones, who had each sold out four dates around a decade previously. After that, the band moved on to larger venues, as,  seemingly, did everyone else and the Roundhouse fell on hard times, finally closing in the early 80s. However, it re-opened in 2006 and The STRANGLERS were keen to mark the 30th anniversary of their HEROES tour residency as well as honour the importance of the venue in the band’s development. So, on 4th November 2007, chosen to coincide with the middle date of the five back in 1977, they took to the Roundhouse stage once again. Fittingly, they performed the same set - bar a switch of one song - as they had 30 years previously, with the addition of two later-period tracks not included on this release. Their 14th appearance at the famous venue was a triumph - particularly after overcoming technical issues which meant they had to stop after eight songs when Dave’s keyboards developed gremlins. Undeterred, when they returned, they powered through the set again from the start, to the delight of the audience - and the gig has subsequently transcended into band folklore.